I purchased a Chromebook Pixel two weeks ago. My goal is to replace my lightweight travel laptop and hulky System 76 with dedicated GPU. Thought I would share my experience.

It’s the only Linux computer I’ve used that successfully suspends and auto updates itself reliably. I stay in ChromeOS for most leisure use and light sys admin. ChromeOS comes with a simple terminal and you can install ssh apps for more (but still limited) features. I find myself using touch more than I thought I would. Usually I stick with the keyboard – I hate using a mouse.

For terminal use I suggest using the Crosh Window app. You can ssh a foreign server or enter an Ubuntu chroot (more about that later). Here you can see me using Vim and a Django development server. Everything is running locally, no Internet required. Note this all requires Developer mode enabled. 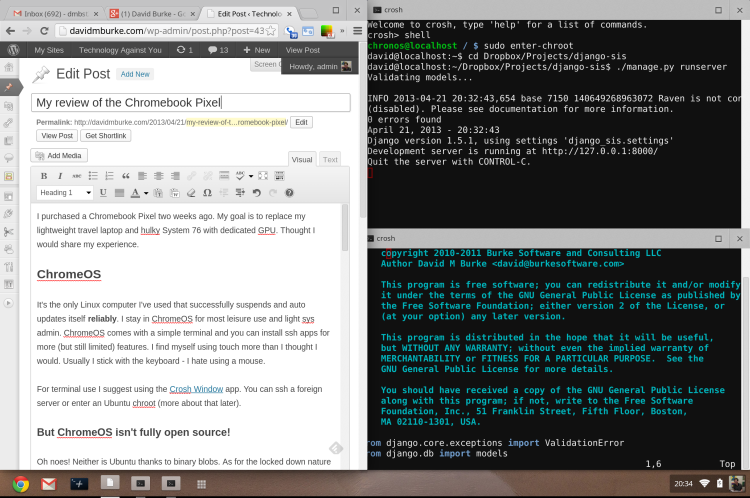 Oh noes! Neither is Ubuntu thanks to binary blobs. As for the locked down nature of Chromebooks – I see nothing wrong with a walled garden as long as you have a key out. That key is developer mode which is very simple to enable. One complaint – You have to press ctrl-D to boot every time after enabling developer mode. Annoying! The Pixel (unlike older chromebook models) can also boot directly into Linux like a normal computer. Other models require more creativity.

ChromeOS is cute – but sometimes I need a real work environment. I went with crouton and KDE. Crouton has some oddities such as not working with upstart. That means services like mysql won’t start on “boot” but can be started manually. There’s a few other quirks but overall I’m pleased. It’s certainly easy to install and you can just keep using the ChromeOS Linux Kernel. I don’t like worrying about kernel updates so now I don’t have to.

What is crouton? It’s a script to set up an Ubuntu chroot for ChromeOS. One can think of it as virtualization in that it lets you use multiple Linux environments at the same time. Unlike virtualization it uses only the original (ChromeOS) Linux kernel and therefore has very low overhead.

How to start mysql automatically in crouton. Edit /etc/rc.local and add before the exit 0

I’m using KDE, a first for me, because it supports DPI changes better than other environments. The Pixel has such a high resolution, UI elements need to scale up to be usable. I found XFCE to be pretty bad at this. Changing the title bars in XFCE requires changing the images files. Yuck! KDE looks very nice after just a few tweaks. Here is what I did.

Not bad KDE! There are a few more steps like making the task bar and window borders larger. But by far KDE is the most customizable and intuitive desktop environment I’ve seen. To compare with Ubuntu’s Unity – all you can do is change the text size in “Accessibly”. There are only 4 choices!  It’s worth noting that Unity and Gnome 3 don’t run currently in Crouton 😦

Touch with Crouton and KDE works surprising well. It’s not as good as ChromeOS, but you can scroll and use multi touch features such as changing work spaces.

Even with KDE many UI elements are off. It’s livable and worth the wonderful resolution. I like editing code with such nicely rendered fonts. If you are going to spend 8 hours a day staring at text in a terminal – why not have really great text? You can see what scales and doesn’t scale on this screenshot. 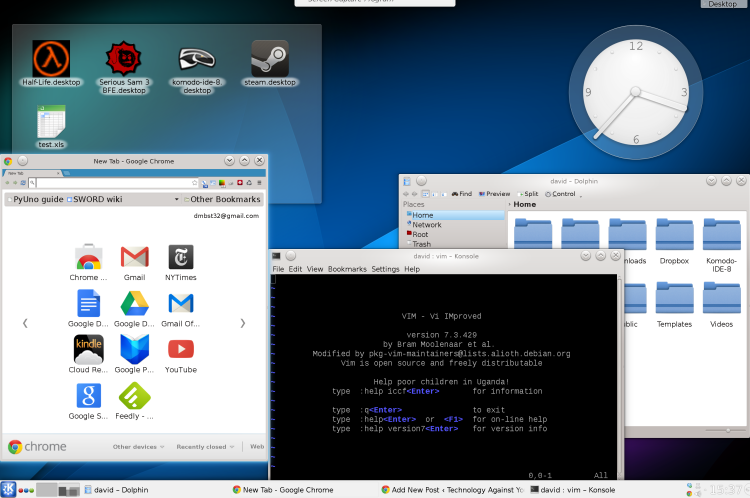 Gaming on the Pixel

Occasionally I enjoy video games especially now that Steam for Linux is out. It does work but has some issues. The Intel HD 4000 GPU is minimally capable of playing newer high end games. I don’t really care much about graphics so this suits me fine. I was able to get Serious Sam 3 running with very lower resolution.

Storage space is a big problem with gaming. I store my steam library on a USB disk. This is fine, but USB 3.0 would have been nice for a $1300 computer! Come on Google! So it loads slowly, but it does work.

Don’t plan on upgrading it

The Pixel can be taken apart fairly easily. However the memory is soldered on. It seems likely the battery could be replaced, but not nearly as easily as a traditional laptop. I don’t see the ram requirements of vim exploding any time soon so this is ok.

The Pixel has some issues for sure. The selling point for me is the wonderful display and it’s the only high end, metal body, lightweight Linux computer out there. The only computer that comes close would be from Apple. Since I hate OSX and Apple’s entire business model, I’m sure not going to buy from them. I haven’t used another computer in two weeks so I’m pretty happy.

Would I recommend it? For most people – no. Despite this good review I can’t think of many people who need a Pixel. If you are new to Linux, the Pixel is a little too hard to get traditional Linux running well on. You would be better off with System 76. Oh well, I love it!