With GeoDjango we can find places in proximity to other places – this is very useful for things like a store locator. Let’s use a store locater as an example. Our store locator needs to be able to read in messy user input (zip, address, city, some combination). Then, locate any stores we have nearby.

We have two problems to solve. One is to turn messy address input into a point on the globe. Then we need a way to query this point against other known points and determine which locations are close.

Before we can really begin we need to set up GeoDjango. You can read the docs or use docker-compose.

It’s still a good idea to read the tutorial even if you use docker.

A PointField stores a point on the map. Because Earth is not flat we can’t use simple X, Y coordinates. Luckily you can almost think of Latitude and Longitude as X, Y. GeoDjango defaults to this. It’s also easy to get Latitude and Longitude from places like Google Maps. So if we want – we can ignore the complexities of mapping coordinates on Earth. Or you can read up on SRID if you want to learn more.

At this point we can start creating locations with points – but for ease of use add GeoModelAdmin to Django Admin to use Open Street Maps to set points. 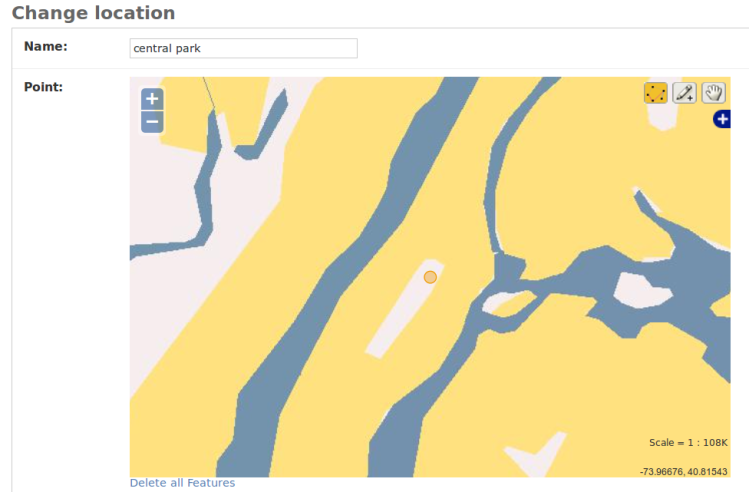 Add a few locations. If you want to get their coordinates just type location.point.x (or y).

Django has some docs for this. Basically make a new point. Then query distance. Like this:

m is meters – you can pass all sorts of things though. The result should be a queryset of Locations that are near our “geom” location.

Already we can find locations near other locations or arbitrary points! In Part II I’ll explain how to use Open Street Maps to turn a fuzzy query like “New York” into a point. And from there we can make a store locator!